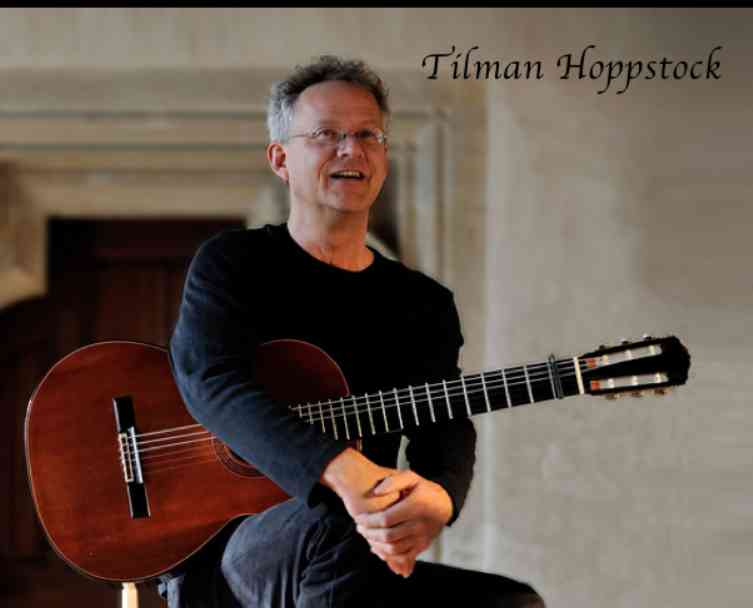 Tilman Hoppstock (*1961) studied guitar and cello in Darmstadt and Cologne. Since 1978 he has undertaken concerttours to the most important culturcentres of the whole world. Tilman Hoppstock has so far made solo appearances in all major centres from Paris to London and from New York to San Francisco, as well as in cities as scattered as Berlin, Jerusalem, Athens, Istanbul, Kiev, Tokyo, Boston, Singapore, Casablanca, Martinique and Mexico-City. Between 1982 and 1985 he gave more than 300 recitals in Europe and overseas.

In addition, he has appeared in concerts and made radio, television and commercial recordings with many ensembles and chamber artists such as Christoph Prégardien (tenor), Peter Wolf (cello), Rainer Zipperling (Baroque cello), Duo Gruber/Maklar, the Rubio String Quartet and Alexis Weissenberg (piano).

Beside his live performances, the artist has recorded about 30 CDs which have been received enthusiastically by the press. In 1999, T. Hoppstock and his partner in duet, singer Christoph Prégardien, were awarded the ‘Preis der Deutschen Schallplattenkritik’ (2/99) for their CD ‘Songs of Love & Death’ (SIGNUM X 95-00 / Christophorus 77320).

In addition to his performing career, Tilman Hoppstock has gained recognition as a publisher of over 80 music editions for children (chambermusic) and advanced guitar students, and of arrangements of baroque works for solo guitar (Froberger, L. Couperin, Buxtehude, Bach). His expertise in Ancient Music resulted in the publication of a critically acclaimed scientific edition of Bach’s works for Lute which is  (sold over 1300 times) regarded a standard source by guitarists all over the world. In 2010/2013 PRIM-Musikverlag has published the english translation of Hoppstocks books about “Bach‘s Lute Works from the Guitarist‘s Perspective“ (Vol. 1, Suites BWV 995 & 996, PRIM 1750-EE1 and Vol. 2, BWV 995-1000, PRIM 1750-EE2). In 2006 Schott-Music published manuscript versions of important works (sonatas and variations) by Manuel Ponce in a critical edition by Tilman Hoppstock.

He runs musicological seminars (“The art of fugue by Bach“ – “Etudes and Preludes by Villa-Lobos“ – “The music for guitar by Leo Brouwers“ – “Different style of harpsichord music by Froberger, Buxtehude and Bach“ – “The complete studies by Fernando Sor“) and has been a very welcome guest at festivals in Europe and overseas for years now.

Tilman Hoppstock took invitations to give concerts and masterclasses at the “Royal Academy of Music” in London, at the “Manhattan School of Music” in New York and in 2006 at the “University of South California” in Los Angeles. Between 2003-2005 he was invited to teach as a guest professor at the Music University in Piteå (Sweden).

Between 1985 and 2007 Tilman Hoppstock has been teaching guitar classes at the Gutenberg University in Mainz. Since 1988 he is professor for an international guitar class at the Academy of Music in Darmstadt where he additionally teaches chamber music, guitar harmony and counterpoint.

Tilman Hoppstock has received the Darmstadt Music Award 2013 for his livework as guitarist, teacher, musicologist and publisher.

In 2014 he obtained one‘s doctorate with his dissertation about „The Polyphony in Bach‘s Lute Fugues“.