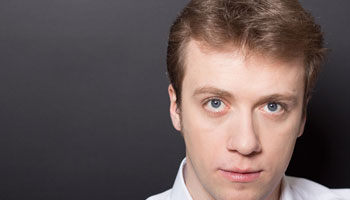 Sanel Redžić is one of the most virtuoso guitarists of the young generation, whom many experts predict a brilliant international career. Performing various repertoires from the baroque to the contemporary music, the musician became one of the important figures on the international music scene.
He was born on July, 25th 1988 in Tuzla, Bosnia and Herzegovina.
He started to play guitar at age of eight in elementary music school in Tuzla under the tutelage of Predrag Stanković with whom he finished secondary music school in 2007 with the highest marks. Then he pursued his studies at the Hochschule für Musik “Franz Liszt” in Weimar where he was studying with Thomas Müller-Pering and Ricardo Gallen.
During his studies he had the opportunity to participate in masterclasses held by David Russell, Costas Cotsiolis, William Kanengiser, Aniello Desiderio, Denis Azabagić, Dejan Ivanović, Petr Saidl, Jorgos Panetsos, Thomas Offerman, Jozef Zsapka, Darko Petrinjak and many others. In June 2005, he was awarded in Tuzla as a teenager of the year for the school year 2004/05.
Until today he has participated on more than 1000 concerts in Bosnia and Herzegovina, Serbia, Croatia, Hungary, Slovenia, Bulgaria, Poland, Czech Republic, Austria, Germany, Switzerland, the Netherlands, Belgium, Spain, Portugal, France, Italy, Greece, Chile, India, China, Japan and the USA where all concerts were highly received by the audience and the music critics. He performed in famous concert halls like Concertgebouw Amsterdam, Tokyo Bunka Kaikan Recital Hall, Philharominc Hall Paul Constantinescu Ploiesti and many others. He is also a frequent soloist with various orchestras.
In major international guitar competitions in Tokyo, and Tychy, the “Forum Gitarre Wien”, Markneukirchen, “Anna Amalia” Weimar, “Andres Segovia” Velbert, Kutna Hora, “Guitar Mania” in Lisbon or the “Guitar Art Festival” in Belgrade Sanel he won top prizes. Meanwhile, he is also a jury member at guitar competitions and gives regularly master classes.
From 2006 Sanel Redžić recorded several CDs for “Gramofon” from Sarajevo, Central German Radio (MDR) and KSG Exaudio and appeared in many radio and television productions.
Sanel plays Otto Vowinkel 2004, Kohno/Sakurai 2012 and Slavko Mrdalj 2013 guitars and uses strings by Savarez and D’Addario.