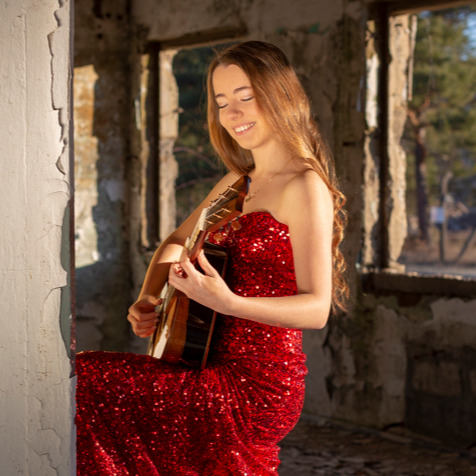 The 20-year-old guitar virtuoso Julia Lange from Babenhausen/Langstadt can look back on numerous prizes at national and international competitions. Having been trained in classical music at a very early age, she now particularly enjoys fingerstyle on steel-string guitar. Her unique arrangements for acoustic guitar, in which she combines modern, percussive elements of fingerstyle with classical techniques, have already inspired millions of people on YouTube. Concert requests have already taken her to Poland, France, Spain and even Hong Kong. Also worth mentioning is the invitation by “Deutsche Grammophon” to accompany soprano Nadine Sierra at live performances in Berlin. The young crossover artist is also attracting increasing attention on television. A portrait of the young artist appeared on the regional television channel MainTV as early as 2015. She was invited by MDR to present a special guitar made with thermo wood. She was also allowed to present her versatility on the ARTE show “Stars of Tomorrow”, where she also accompanied the famous tenor Rolando Villazón. She also appeared in Hong Kong at “The Works” on the channel RTHK and at the end of 2018 Sat.1 and the Hessenschau reported on the young artist’s work.

Julia has been studying acoustic guitar at the “Musikhochschule Carl Maria von Weber” in Dresden since the end of September 2017.