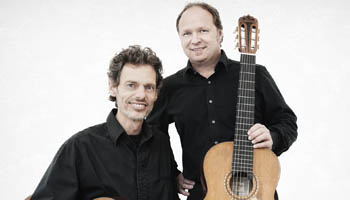 Christian Gruber and Peter Maklar, two dedicated and idealistic ambassadors for the classical guitar, have been playing together for 30 years and have long represented one of the pre-eminent ensembles on the international guitar-music scene. Composer Dusan Bogdanovic says of them: “This duo is the best that guitar chamber ensemble can offer today.” And the Süddeutsche Zeitung wrote after one of their concerts: “This is how one imagines benchmark performances.” Their successful concert career took off when Gruber and Maklar won first prize in the International Guitar Duos Competition in Montélimar/France in 1991.

Numerous concert tours have taken the Duo to almost all countries in Europe, as well as to Mexico, Chile, Martinique, Canada, USA, Russia, Japan, and South-Korea. Christian Gruber and Peter Maklar have been guest performers at such famous venues as the Manhattan School of Music in New York, the Moscow Philharmonic Society´s Tschaikovsky Concert Hall, Gendai Guitar Hall in Tokyo and Amsterdam´s Concertgebouw.

Many respected composers, including Dusan Bogdanovic, Enjott Schneider, Wulfin Lieske, Atanas Ourkouzounov and Paolo Devecchi have written works for the Duo or dedicated pieces to them.
Eight CD releases featuring music ranging from Baroque to modern testify to the Duo´s artistic versatility, as do the numerous editions of their arrangements of special masterpieces by Doberman-Yppan in Canada.

The Duo maintains artistic partnerships with the Japanese singer Tomoko Nakasugi, the oboist Christoph Hart¬mann (Berlin Philharmonic Orchestra), the violinist Key-Thomas Märkl (Bavarian Radio Symphonic Orchestra), Bavarian Radio´s announcer Alex Dorow and the internationally famed guitarists Tilman Hoppstock and Dimitri Illarionov. Since 2009 Duo Gruber & Maklar has made regular guest appearances with the Amadeus Guitar Duo.
Since 2008 they have been organizers of “Festival Faszination Gitarre” in Landsberg am Lech/Bavaria, a course for over 70 participants with internationally renowned artists and workshops.

“Their technique is spectacular, their musical understanding cannot be overstated, their ensemble with each other is outstanding and, as they proved in a magnificent evening of music on December 7th at the Manhattan School of Music a part of the Augustine Guitar Series, they deserve to be recognized as one of the finest guitar duos in the world.“ (Guitar Review, USA)