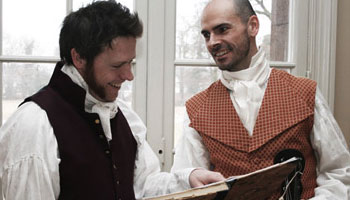 With historic guitars in hand and a lively performance style, Duo Historico breathe life into the seductive music of the 19th century Their small elegant guitars, which have a surprisingly large and beautiful tone, despite their size, bring an extra energy and vitality to this lyrical, yet energetic music. 19th century musicians demonstrated their ingenuity and inventiveness by improvising and varying their works ever so slightly each time they played. These skills have not been considered virtues in the modern world of classical music, but now they are being brought to life again.

Duo Historico are among the pioneers of this renaissance and they give, through words and music, unique access to the golden age of the guitar. Authenticity is essential for Duo Historico. Everything is from the 19th century: the music, the stories, the guitars and the specially sewn clothes.

Lars Hedelius-Strikkertsen (1973) studied at The Carl Nielsen Academy of Music under Professors Jesper Sivebæk and Jan Inge Wijk. Due to his passion for history, Lars acquired an original 19th century guitar at the start of his studies. This was the beginning of his comprehensive study of the music and performance techniques of the 19th century, with, amongst others, Viggo Mangor and Nikolay Ronimus as teachers.

Ruben Ipsen (1977) studied at The Royal Academy of Music, under Professor Karl Petersen. In 2004 the year after graduating, Ruben was accepted to study as a postgratuate soloist at The Royal Academy and debuted at The Concert Hall in Aarhus in 2007. In addition to studying flamenco and classical guitar in Spain for a year, Ruben has also studied Perfomance Practice for Baroque music with Viggo Mangor and participated in numerous Masterclasses held by, amongst others, Göran Söllscher and John Williams.