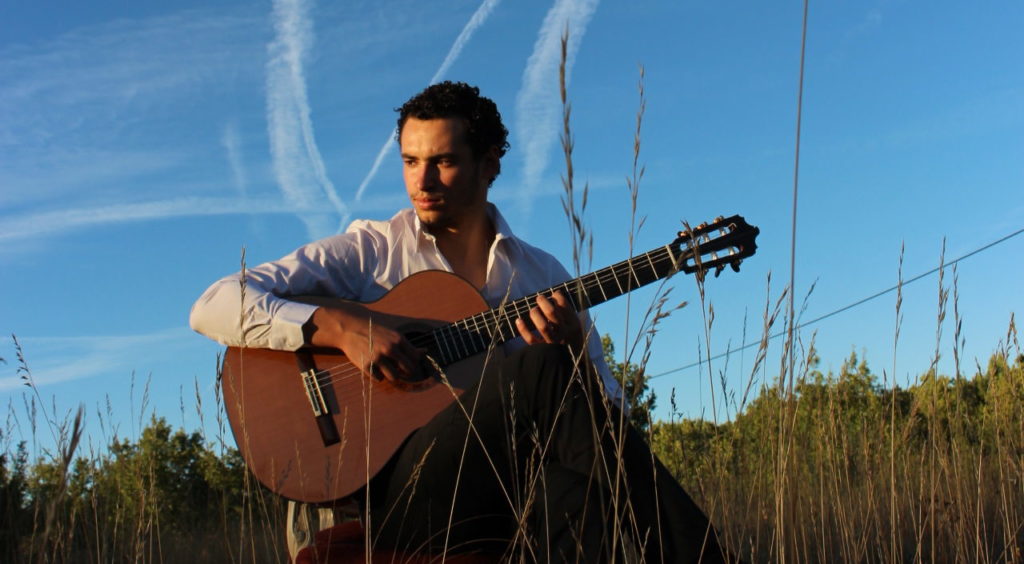 Born in 1995, Cyprien N’tsaï grew up in Marseille in the South of France. Inspired by his father, he took an interest in the guitar and followed Raymond Gratien’s teaching at the Marseille Conservatory. In 2013, he moved to the capital to perfect his skills with Jérémy Jouve de Tania Chagnot and Judicaël Perroy.

At the age of 20, he won first prize at the EEIGF international competition in Tokyo (Japan). This was followed by first prizes in Kutna Hora (Czech Republic), Carry-le-Rouet (France) and Vienna (Austria). In Tokyo, he recorded his first album “Reflets”, released in February 2017 by Sylphide records. Cyprien N’tsaï is invited to perform in Asia (Japan, Thailand) throughout Europe (Austria, Poland, Ukraine, Italy…) and is regularly featured in France. He performs in solo recitals offering a repertoire of varied styles on which, in a process of cultural mediation, he shares his opinion with the public. In 2020, he created the Balad’un âne concept, a walking tour of villages in his native region. In addition to this soloist career, he now also gives concerts in chamber formations. He performs a repertoire of French melodies (Debussy, Faure, Satie…) arranged for voice and guitar with the soprano Olga Vojnovic. As he takes transmission to heart, he teaches guitar at the CRD of Aulnay-sous-Bois and continues his pedagogical training at the higher pole of artistic education of Aubervilliers (pôle sup’93). Born in 1995, Cyprien N’Tsaï grew up in Marseille in the South of France. Coached and inspired by his father, he started playing guitar when he was 8 years old and he attended the claws of Raymond Gratien, professor at the CRR of Marseille. In 2013 Cyprien came to Paris to pursue his apprenticeship first with Jérémy Jouve, then with Judicaël Perroy at the Aulnay-sous-Bois Music School (France). Passionate about his instrument, he participated in various international competitions. He already won first prizes in Tokyo (Japan), Petrer (Spain) in the youth category, Carry-le-Rouet (France), then Kutna Hora (Czech Republic) and Vienna (Austria). Finally he just recorded his first CD “Reflets”, successfully released in February 2017 by Sylphide Records Company (Tokyo, Japan). Cyprien N’Tsaï’s greatest pleasure is to play on stage. Invited several times to perform in Asia (Japan, Thailand), in Europa ( Poland, Germany, Austria, Montenegro…) and regularly appearing in France including for a solo recital in the Radio France festival, this young and talented artist offers a varied program ranging from contemporary music to popular pieces. In 2020 he created the project Balad’un âne (“travel with donkeys”) wich represent a tour by feet, village to village, in Provence, his native region. Besides his solist carrer, Cyprien N’Tsaï also performs in chamber music. He especially interprets French melodies (Debussy, Faure, Satie…) in duo with the soprano Olga Vojnovic. While teaching guitar at the Music School of Aulnay-sous-Bois (suburb of Paris), he still pursuing his training at the superior conservatory of Aubervilliers (France).