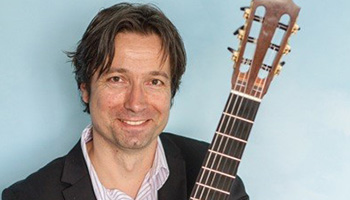 Benjamin Scheck was born in Geneva. He studied at the conservatories of Zurich, Bern and Lucerne, as well as at the Ecole Normale Supérieure de Musique in Paris. He performs both as a soloist and in various chamber music formations. He is particularly interested in folk music, such as Brazilian chorinho music, where he also plays bandolim, the Brazilian variant of the mandolin. He took part in various CD productions, such as the complete recording of Frank Martin’s chamber music works for guitar. His solo CD with sonatas by Domenico Scarlatti was released in 2007. Benjamin Scheck has been teaching guitar at the Kantonsschule Baden (CH) since 1992 and at the Musikschule Uster Greifensee since 2007. He attended further training in jazz guitar with Michael Jeup and in didactics with Gertrud Jenny. Benjamin Scheck is currently attending an ongoing master class with Paul Galbraith.