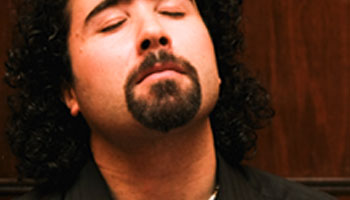 Antonio Amodeo was born in Piacenza in 1980. He began studying classical guitar with Maestro Marco Taio at the “Conservatorio G. Nicolini” in Piacenza, where he obtained a bachelor’s degree with honors, praise and mention. Two years later he obtained, at the same institution, the Master in music performance.

He enriched his musical education by attending various training courses and master classes with internationally renowned masters including Carlos Bonell, Walter Zanetti, Claudio Marcotulli, Emanuele Segre, Leo Brouwer, Tilman Hoppstock, Claudio Piastra. As soloist he got several awards including scholarships of merit, and premiered in Europe works of latino-american composers such as Guido Santorsola, Eduardo Flores Abad and Mario Gomez Vignes. His concert activity leads him to perform in Italy and abroad, cultivating a very versatile repertoire that ranges from classical to the contemporary-folk-ethnic. In March 2010 with the ”Ipanema Duo” (flute-guitar) he records a CD, published by the label “Sheva Collection”, including original arrangements and premiere recordings. He’s also active on the front of the extra-classical music, over which has always had a keen interest oriented to improvisation and creativity. Many in this respect, his collaborations with new musical realities (“Coro 5 Terre” in Genoa, “Florilegio ars Factory” and the group of Irish music “Land O’Smiles”) to carry out artistic projects related to folk music and experimentation. Since 2009, he cooperates with portal “www.chitarraedintorni.eu” on which he has already published some essays from an educational and musicological point of view. Also important is his experience in teaching: graduated in Science of Education from Catholic University of Piacenza in 2004, he attended courses about the guitar teaching with Mauro Storti and taught in academies and music schools such as the Institute Diocesan Sacred Music (Piacenza), the Music Academy of Stradella and the Secondary School (with musical projects) G. Griffini in Casalpusterlengo (PC). He’s also giving master-classes for young guitarists by the summer-camp “Voltaggio Classica”. Since 2009 he ‘lives in Germany, when he’s regularly teaching at the music schools of Constance and Radolfzell am Bodensee. He’s also perfecting at the “Hochschule für Musik” in Mainz with Master Stefan Hladek.